REVIEW of Exhibition in Indian Express 31 May 2016 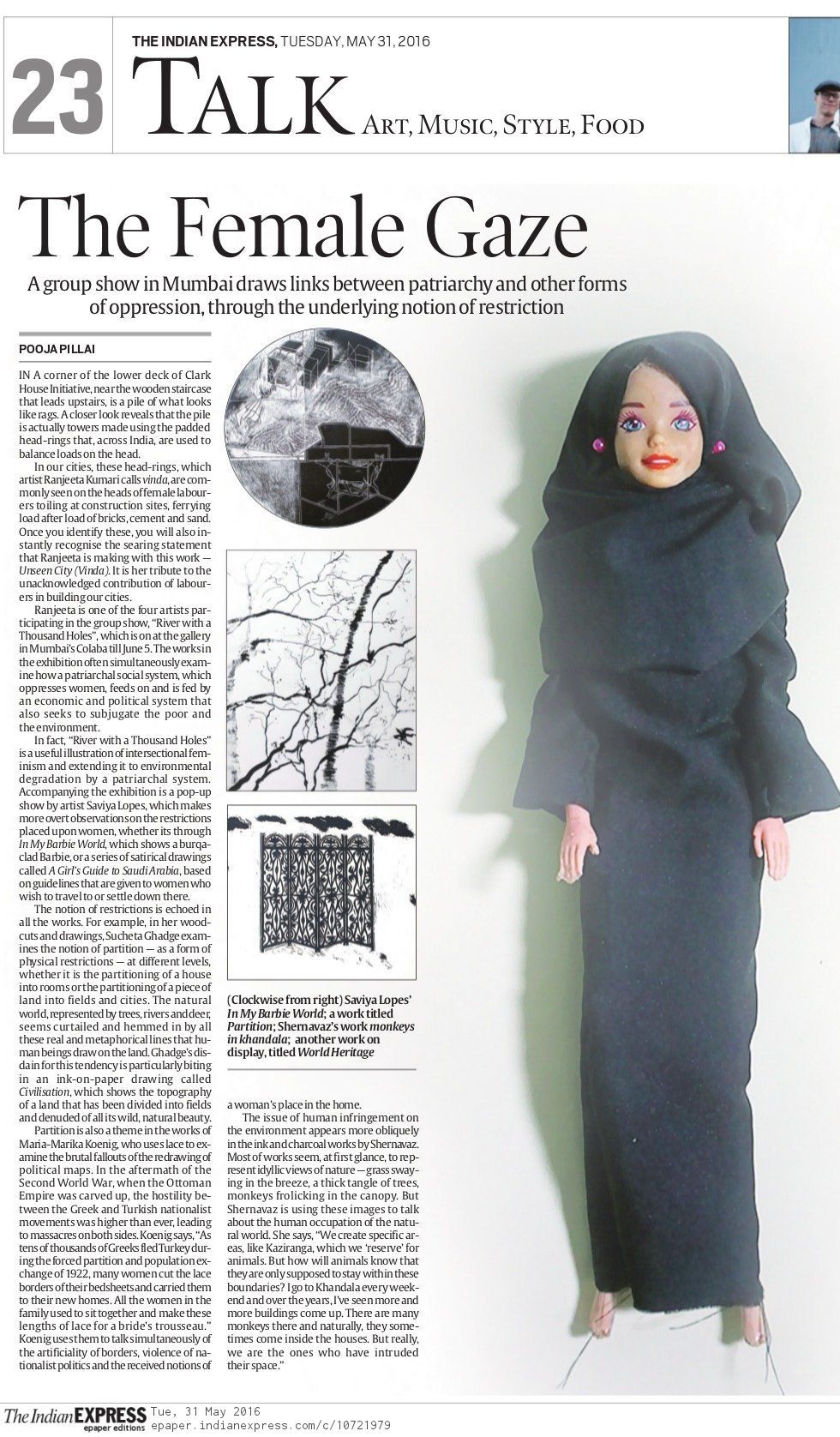 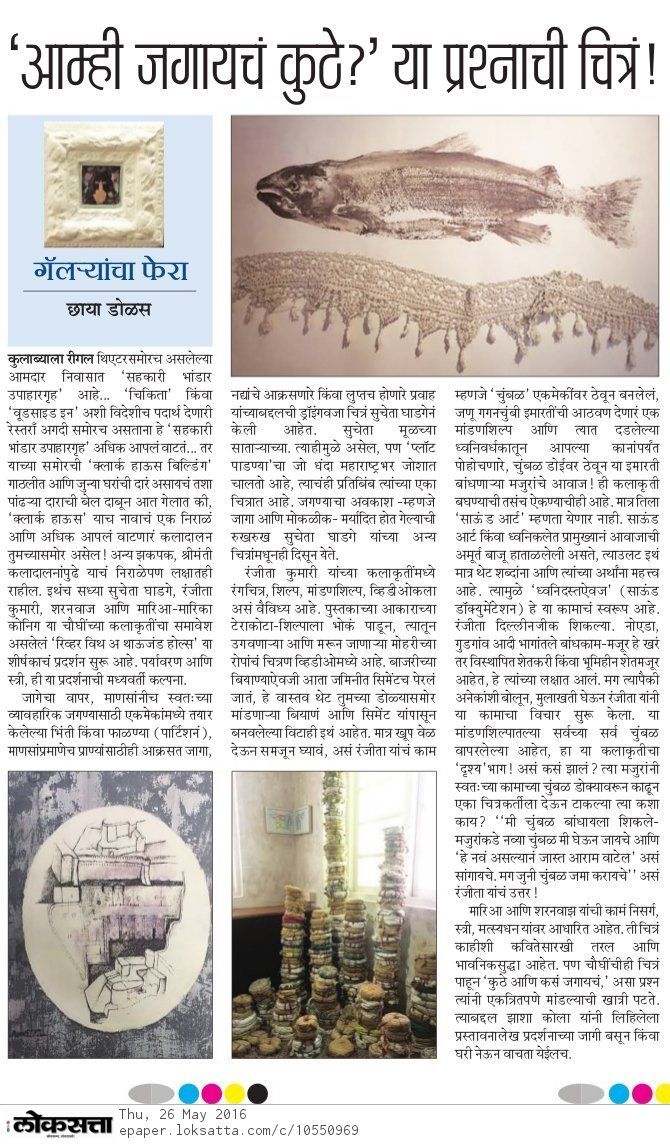 Review of exhibition in Hindustan Times 21 May 2016

River with a thousand holes

Sucheta Ghadge’s serialised half-abstract woodcuts and circular drawings—arranged as a game of hopscotch, or black-and-white Japanese Go checkers—oscillate between two main themes: the flow of a river, its animal life wild and awake, almost audible, and the theme of partitioning, siphoning off water supplies, draining, diversion and fragmentation of natural life. A stag leaps in one image, to sit encased in another work within cubist boxes the size of its body. The artist aptly titles certain works ‘Bonsai’—a kind of unnatural curtailing, a replica of its natural self in miniature, but entirely artificial—recalling a game sanctuary or natural reserve, which she also seems to draw. The theme of partitioning moves from a woodcut of a Kashmiri-style hand-carved wooden freestanding folding-screen made for a room, to drawn architectural spaces—forts, house-plans—that in the same drawing self-divide between families. Nature is partitioned, into fields. In the waters that flow down from Pune, toward her hometown Satara, the land is filled with monocrop sugar cane plantations. Green as they seem, they exaggeratedly consume the river waters. And waters are further diverted from rural life to feed the urban towns and cities. Her repetition of the word partition, cannot but connect to the brutality of the Partition at Independence into India and Pakistan. A line drawn in red somewhere in a white landscape. And yet she is intuitively, exact. It was the whole Indus Rivers and tributaries that flowed from the mountains through the plains that were divided, among the flight of people, in Partition. We partitioned a river.

The Brahmaputra is not a different story. China has built many dams on the Brahmaputra, and has delayed and withheld the release of waters to lower-lying countries, as a card up its political sleeve in negotiations with them. The group of works by Shernavaz  speak powerfully to these themes. In ink or charcoal, the works collect scenes where human life is an occupation of the natural and animal world. The natural reserve seems to resound in both the artists views, as a bonsai, or to this artist, the safari into the reserve is a trespassing into “their lands”. Their lands, are the inked River in the Kaziranga on the flood planes of the Brahmaputra, a fleet of fish—flecks of abstract black ink—that leap under water, the cavernous forests of Mahabaleshwar, or the large trees of Khandala filled with swinging life, among them, a quiet, meditating monkey.

Works by Ranjeeta Kumari, connect the turning of land, from agricultural lands of Noida in the outskirts of Delhi, to cemented sprawl—succinctly, with the making of bricks from grain, that in a line, finally are overcome by cement. Her similarly eco-feminist position, connects the changing of land, to the Preamble, to the constitution, and to fundamentalism, in a work ‘Farming of fundamental’, composed of a video and a sculpture. She studies labour, through a sculptural playing with the rags of cloth used to balance heavy loads, of grain, but equally perhaps of construction materials. Other watercolours deconstruct the cloth fabric through several shapes.

The final room speaks of another partition, through the material of lace. Maria-Marika Koenig was given lengths of lace by a dear friend, who began to collect lace borders in Greece. He began with his grandmother’s own lace borders, then collecting others. While fleeing Turkey to Greece in the 1922 forced partition and exchange of population, women cut up their dowry-trousseaus of bedsheets, lined with borders of crochet and lace, and carried them to Greece. The decision to divide and cleanse both countries based on religious identity—that in Turkey amounted to mass rape, looting, fire, and genocide—happened so suddenly, people arrived as paupers, carrying almost nothing. A mono print of a salmon, swims with a freedom of curves the lace tries to mimic in its own, different, forced expulsion across the sea.

Many of the titles foreground marriage, because these lace borders would have been handmade collectively by women sitting together preparing before a wedding. Serigraphy prints on cotton and silk of the brass votives of the 20s and 30s are placed within the lace borders. They show all the elements of patriachal expectation: arrangements of the ladies as wives, young children, and the house. In one work, the artist adds a portrait of herself from the 1980s, standing against the sea, with a Turkish-influenced headscarf. 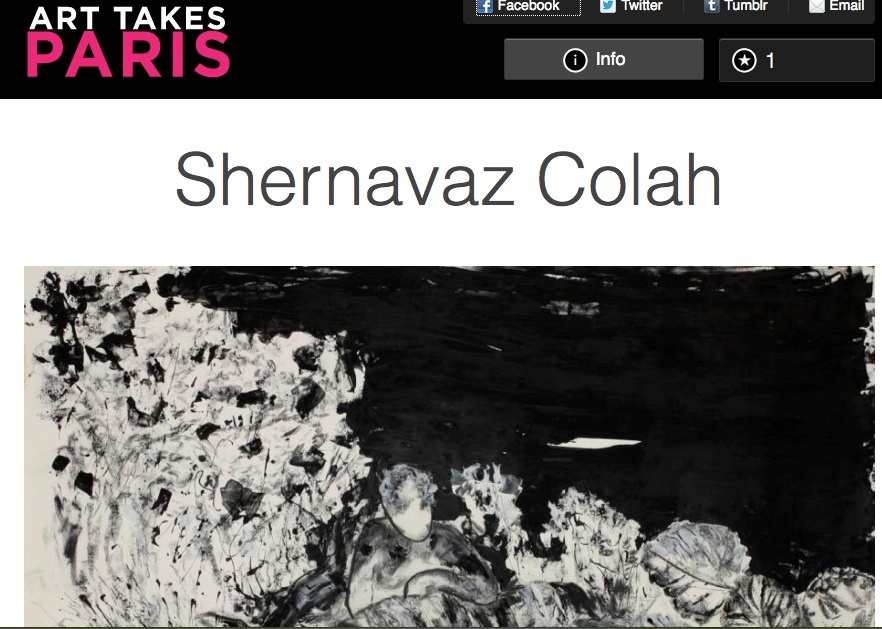 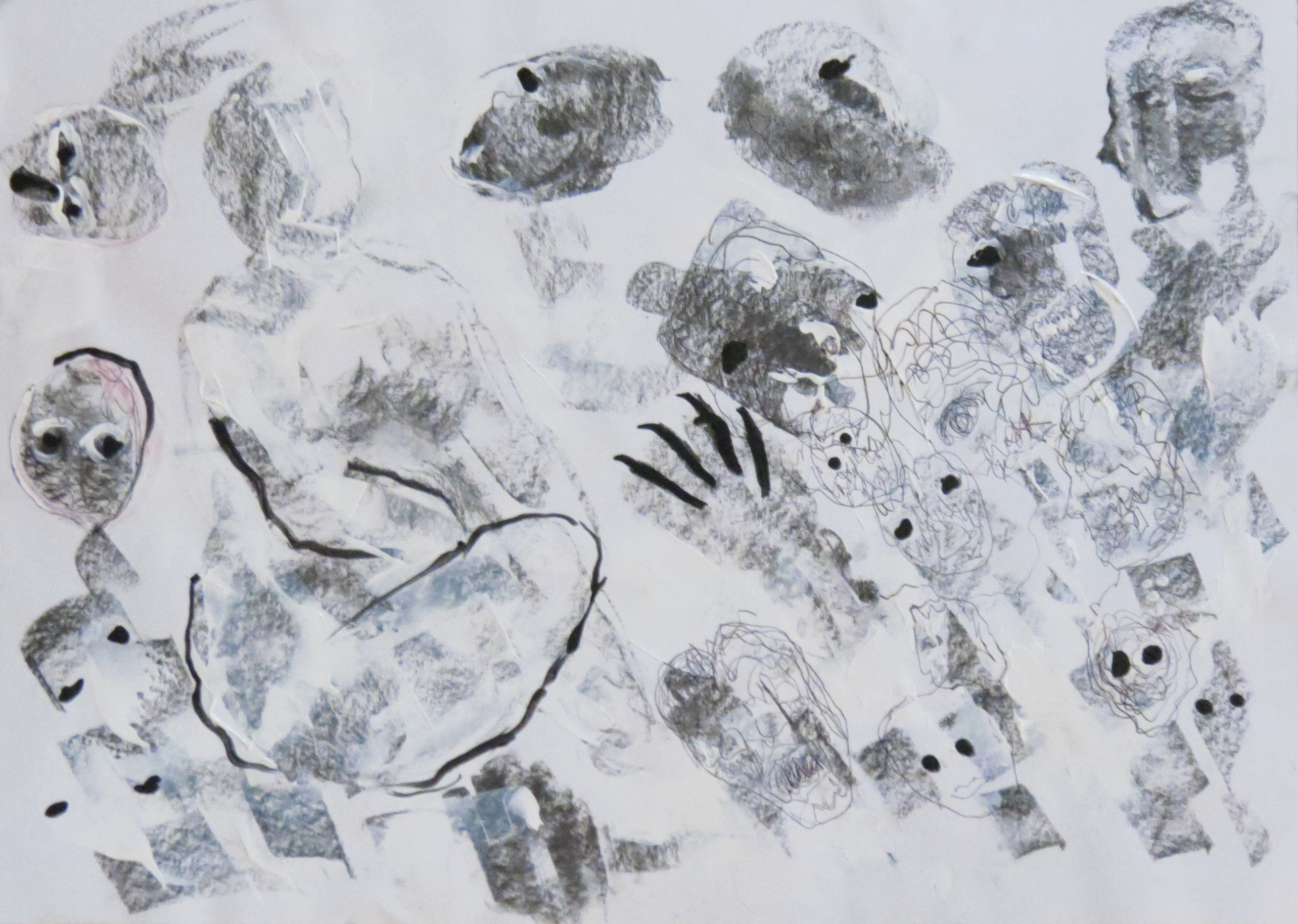 Portfolio on See Me

A portfolio of work is also on see.me 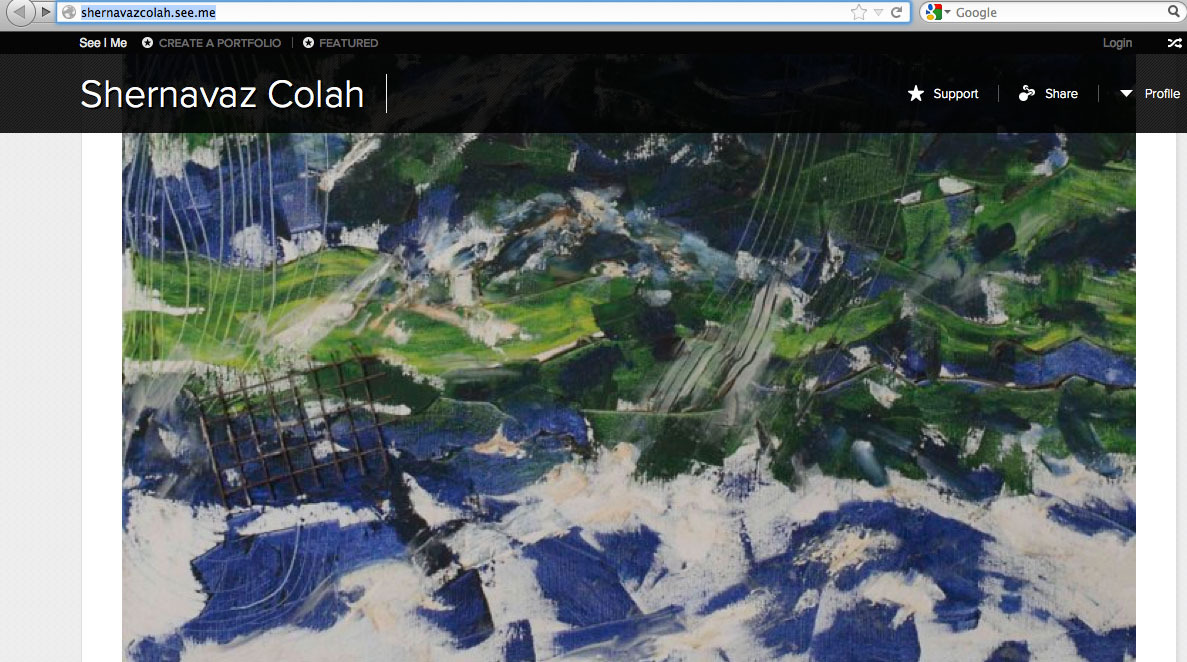 Participated in the group exhibition ART TAKES MIAMI in Miami in December 2012. 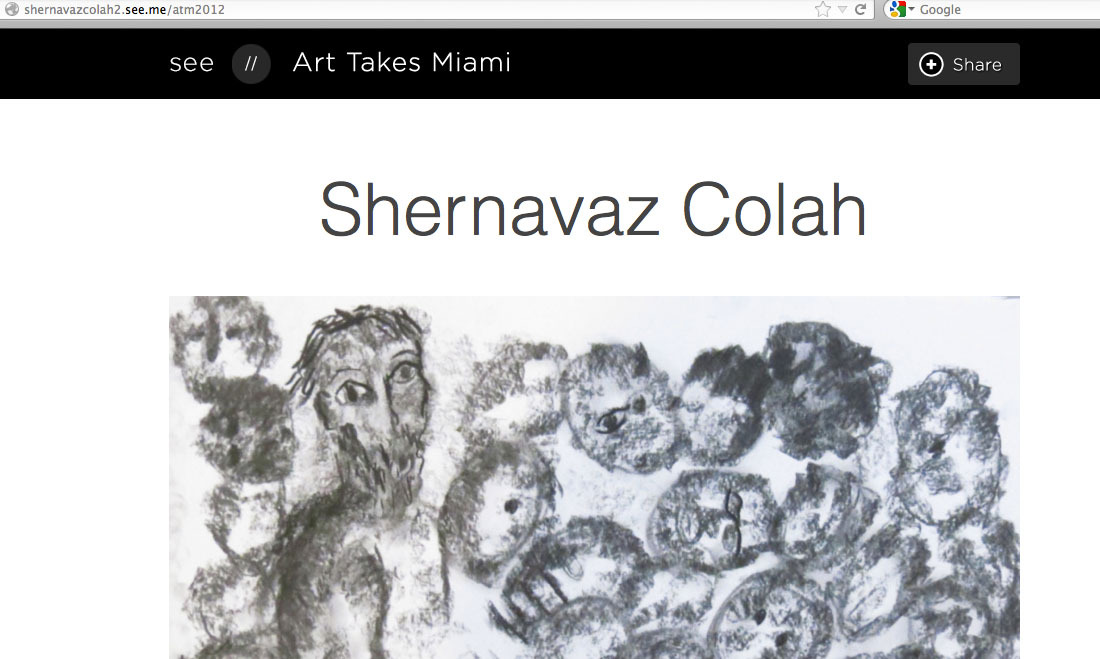 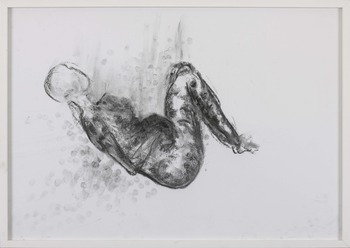 Participated in the group exhibition ART TAKES TIMES SQUARE in New York in May 2012. Gallery Note

Editor and author of a book on the renowned Sri Lankan artist Justin Daraniyagala (1902 - 1967). 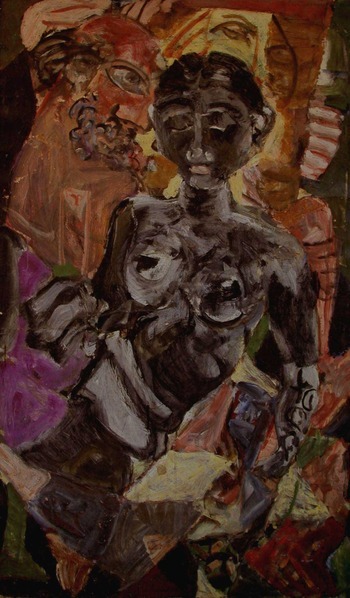 An Evening of Music and Art 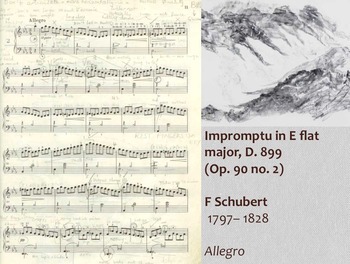 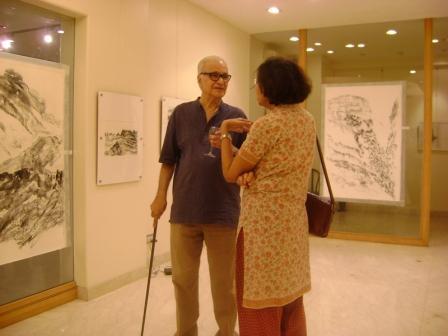